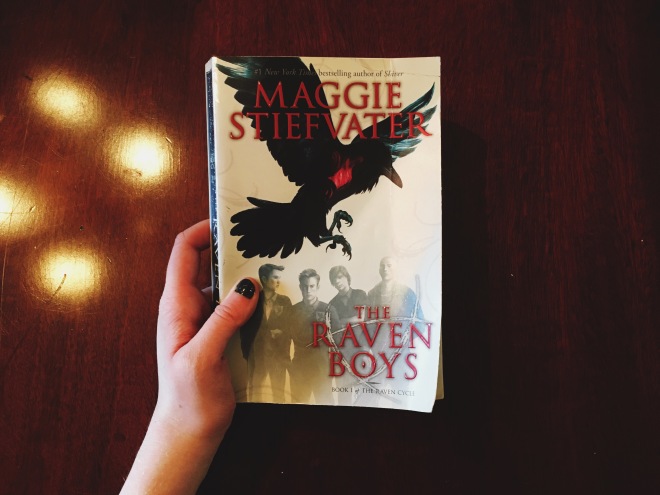 The Raven Boys by Maggie Stiefvater, originally published in 2012 by Scholastic

Having already read the entirety of Maggie Stiefvater’s Shiver trilogy, I already knew I could expect incredible writing and an unusual twist in the book I was about to read.

The Raven Boys is the first of four books in the series, called “The Raven Cycle.” The second is The Dream Thieves, then Blue Lily, Lily Blue, then finally, The Raven King. Stiefvater has also published a short story from the series called Opal, set a little while after the last book of the series ends. The series is also confirmed to become a TV show on Syfy. I’ll admit, I am nervous to see how it will turn out, considering my expectations from the book will be sky-high. However, I remain hopeful.

The Raven Boys is a story surrounding a girl named Blue, and four boys: the aggressive Ronan, the charming Gansey, the endearing Adam, and the reserved Noah. Blue lives in a house full of psychic women, who have told her ever since she could remember that if she was to kiss her true love, he would die. This was unconcerning to Blue until she sees the soon-to-be dead spirit of a boy. This boy is Gansey.

The boys go to Aglionby Academy, a wealthy private school in the town of Henrietta, Virginia, where she lived. As her life becomes intertwined with the Aglionby boys’, the plausibility that her true love would die becomes clearer and clearer. Together, they set on a mission tending to one of Gansey’s obsessions: the myth of an ancient Welsh king asleep somewhere in Henrietta, and the path to his tomb is traceable through ley lines. (Despite the complicated jargon of Welsh mythology, pseudoscience, and magical realism that makes up this subplot, Stiefvater somehow pulls it off fantastically.)

The chapters are separated by character, although the entire book is in third person. I was pleased that the book was written in this perspective, as I feel like third person is the best way to keep up with several different characters without it being overwhelming. It also gives the reader insight into certain details that the characters in the story may be oblivious to.

How do I begin with discussing the characters? I simply cannot put into words how much I love them. This is one of Stiefvater’s many talents: her ability to create beautiful, flawed, complex characters that you cannot help but fall in love with. It would be much too long if I analyzed all of them, so I will do the two main characters: Blue and Gansey.

We will start with Blue. She is strong, unique, and incredibly stubborn. She is not afraid to tell off anyone who crosses her, but is also extremely compassionate and protective over the people she loves. Her feminist values and her iconic clothing style adds to her character in the best ways possible, and her relationship with each Aglionby boy is specific and distinct.

Gansey. In a way, he is the glue that keeps them all together. With his politician-like smile and his charming personality, he is the personification of old money. Despite this, he is extremely likable and almost endearing, since his pure kindness is evident throughout the entire book. He is an intellectual force with a strange affinity for Welsh kings, ley lines, and an overstuffed journal filled to brim with his obsessions.

Once again, I am enthralled by Stiefvater’s writing. Her style and prose is captivating, and her ability to string words together into incredible, emotional phrases still is shocking. If you see Maggie Stiefvater’s name on a book, do yourself a favor and give it a shot. Even if magical realism isn’t your favorite genre, Stiefvater’s incredible writing and complex characters will probably win you over anyway.

Click here to listen to my The Raven Boys Spotify playlist.

Other places you can find me